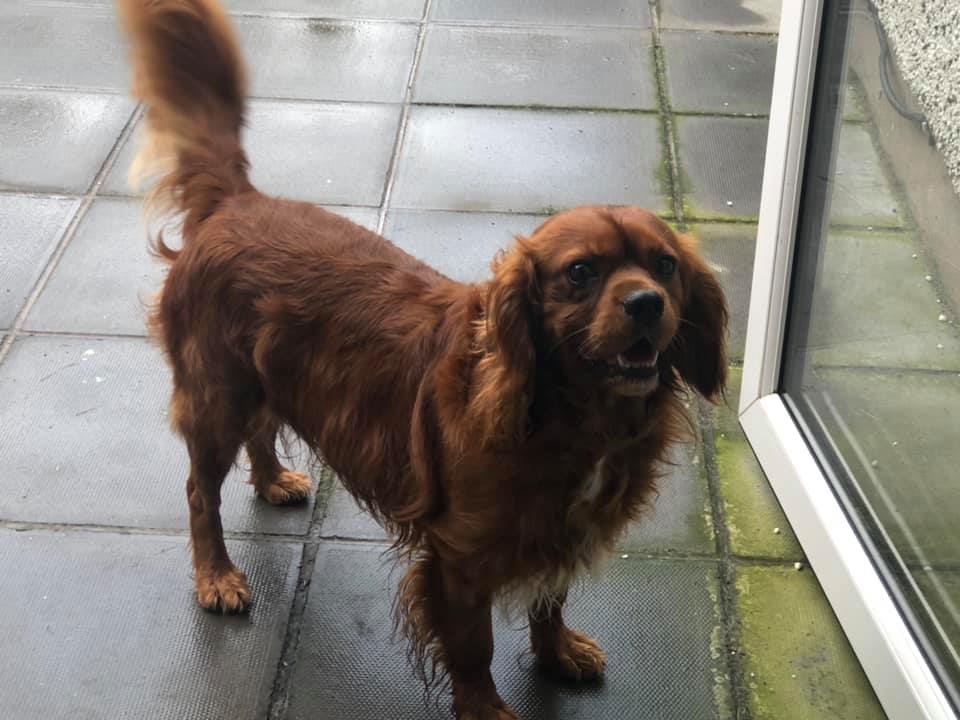 Sensible children 7 and over

Bing is a 4 year old King Charles Cavalier who is a gentle giant although being larger than your average cavalier, he doesn’t seem to think he’s a big boy and jumps around like a little lamb. He is a loving boy and enjoys lots of cuddles from his foster mum. He is an ex breeding stud dog that lived outside all his life so is now enjoying the finer things in life. Sofas and humans’ bed.

Bing can be unsure of sudden movements and can get overwhelmed backing away, but with patience and reassurance he will come to you. He is a laid back boy who is very loving and dopey and loves to know everything that’s going on. He can be frightened and unsure around young loud children and will keep his distance but is fine with older calmer children.

Bing lives in a foster home with 3 other dogs and has never shown any aggression but likes to get his nose in anything that’s going on always the first in line when everyone is called so he doesn’t miss out. He prefers to snuggle up to the female dogs in his foster home rather than the male. He has not been tested with cats or small furries.

Bing will jump up on the settee to get close to you and will try to fit into the smallest gaps but is also quite happy to take himself off to the other end of the settee and snuggle up next to one of the girls. He’s starting to learn to play now and will have a funny five minutes running around playing with toys. He’s desperate to play and is slowly learning. Bing is pretty much house trained but can mark if he smells other unusual smells around the home but only now and again. Bing sleeps on his foster mums’ bed and loves to be snuggled up close to her sleeping all night. If left downstairs he will cry and pace.
He loves his food and eats well. He is used to being left for a few hours at a time with his foster siblings without any problems and will give you a huge welcome when you return.

Bing is unsure on the lead and if on his own will stand still and not walk, but with time and patience and help following the other dogs he will come out of his shell and enjoys exploring.

Bing needs a home with another resident dog preferably a female, or a laid-back male that likes to play. Bing would be fine with calm and gentle children 7 and over and would love to be walked regularly every day to explore the outside world. He’s very curious of the outside and has energy to burn but just needs lots of reassurance and patience so a family which has the time to spend with him is a must.

Sensible children 7 and over

Family willing to spend time getting to know him

Microchipped, Vaccinated and up to date flea and wormer