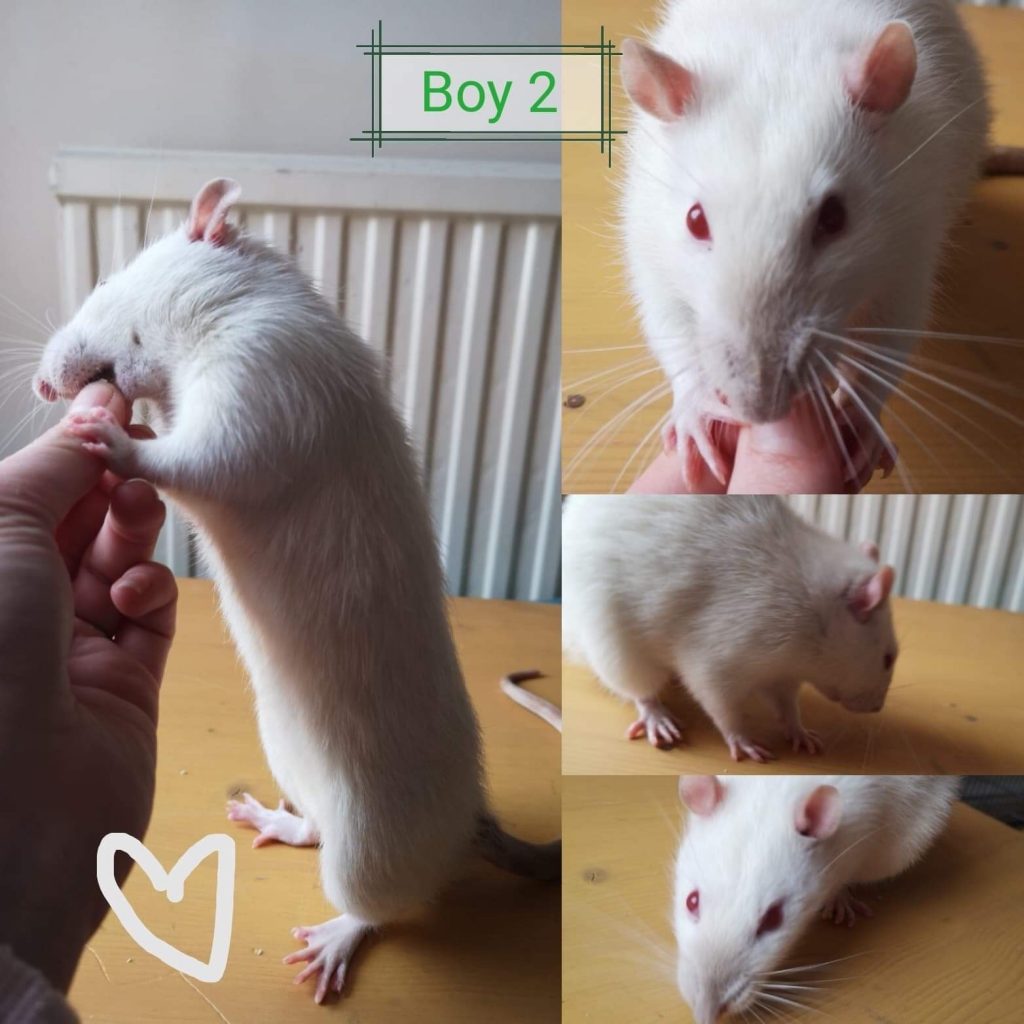 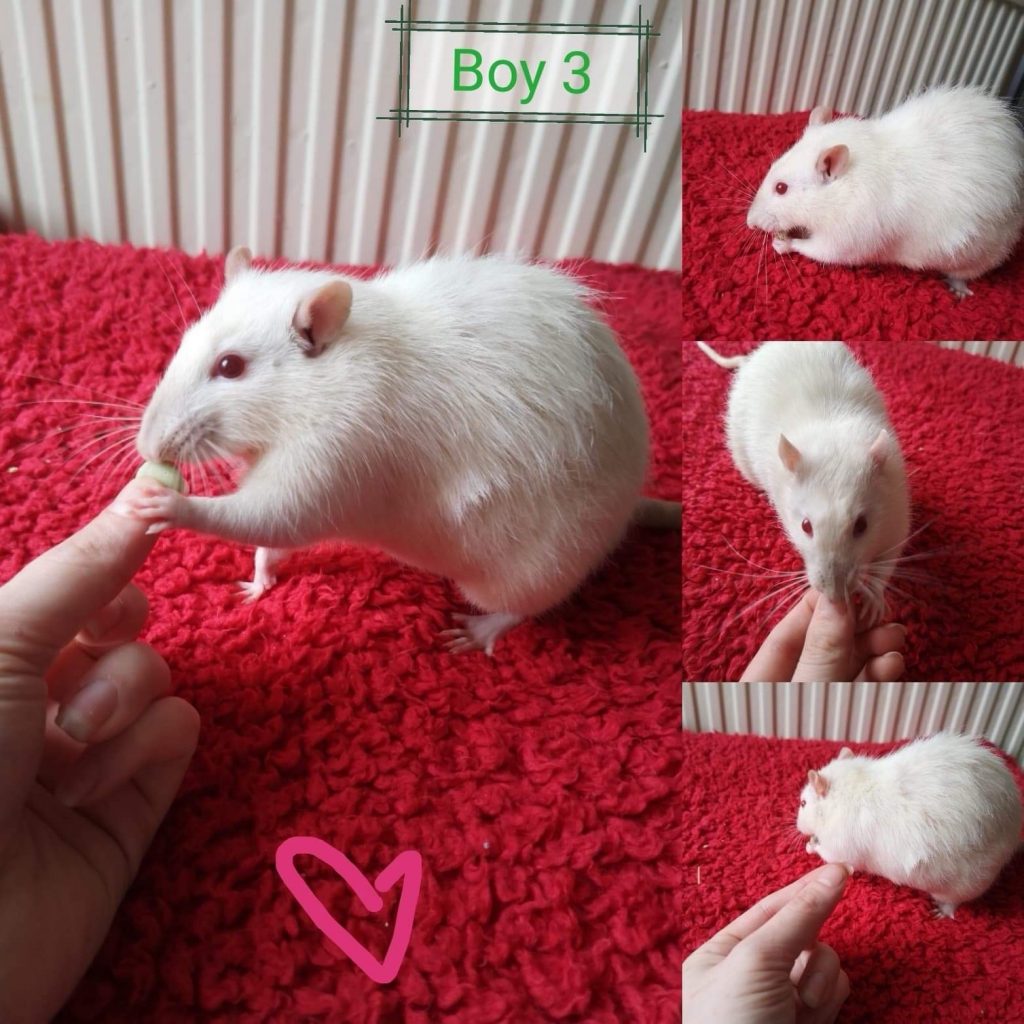 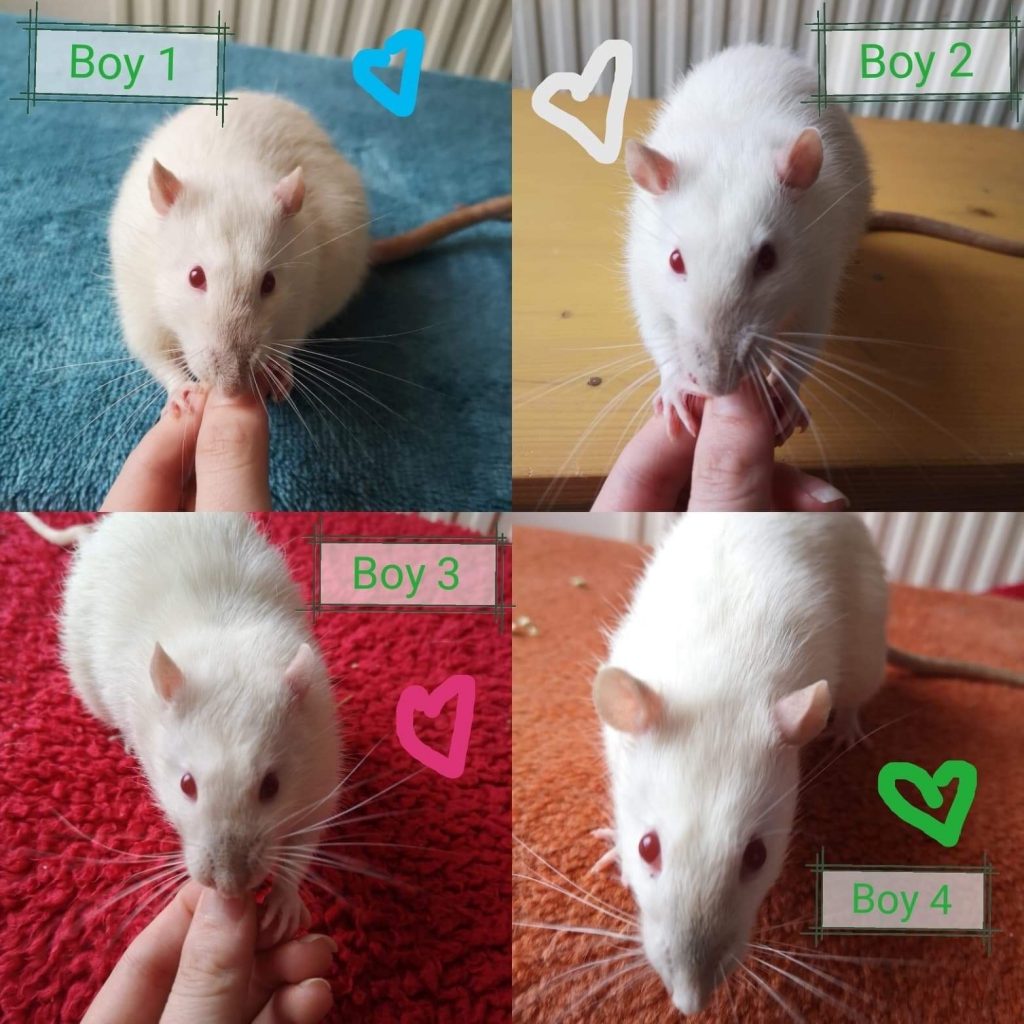 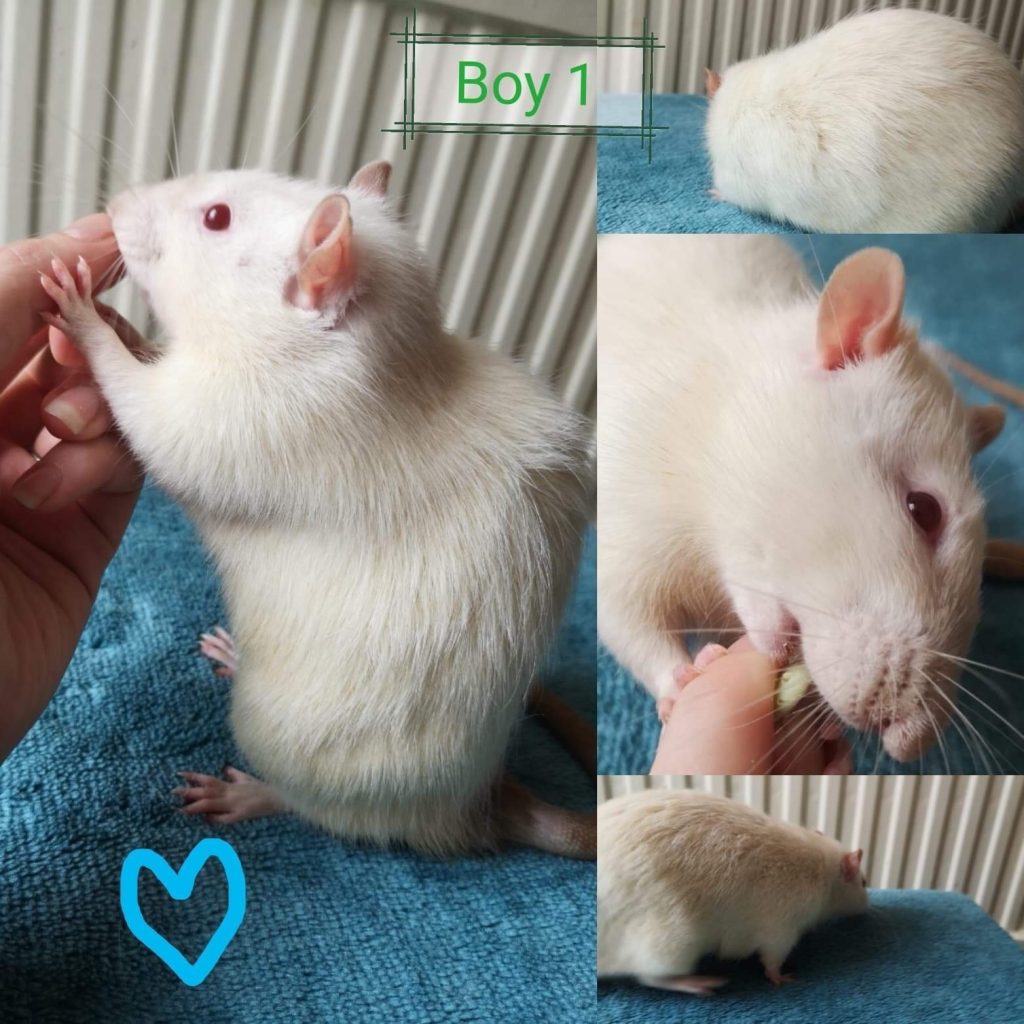 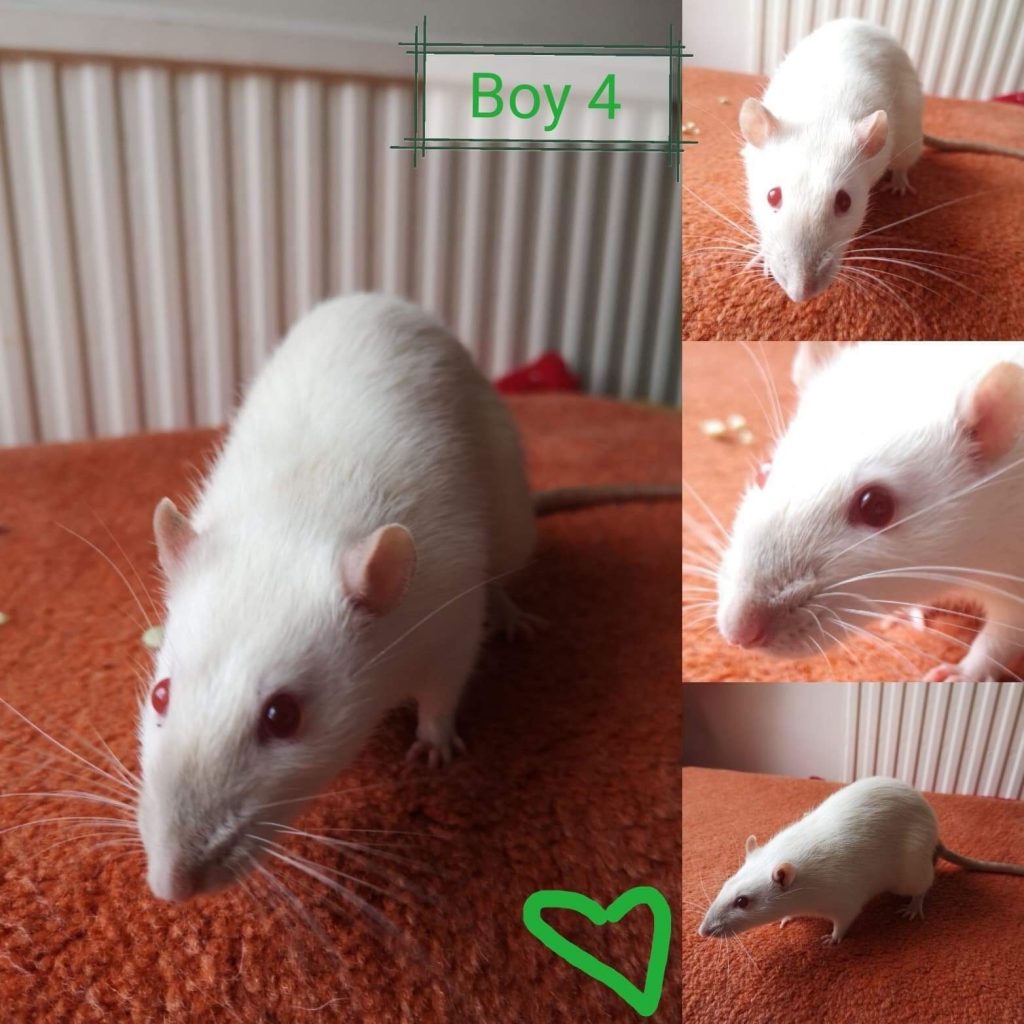 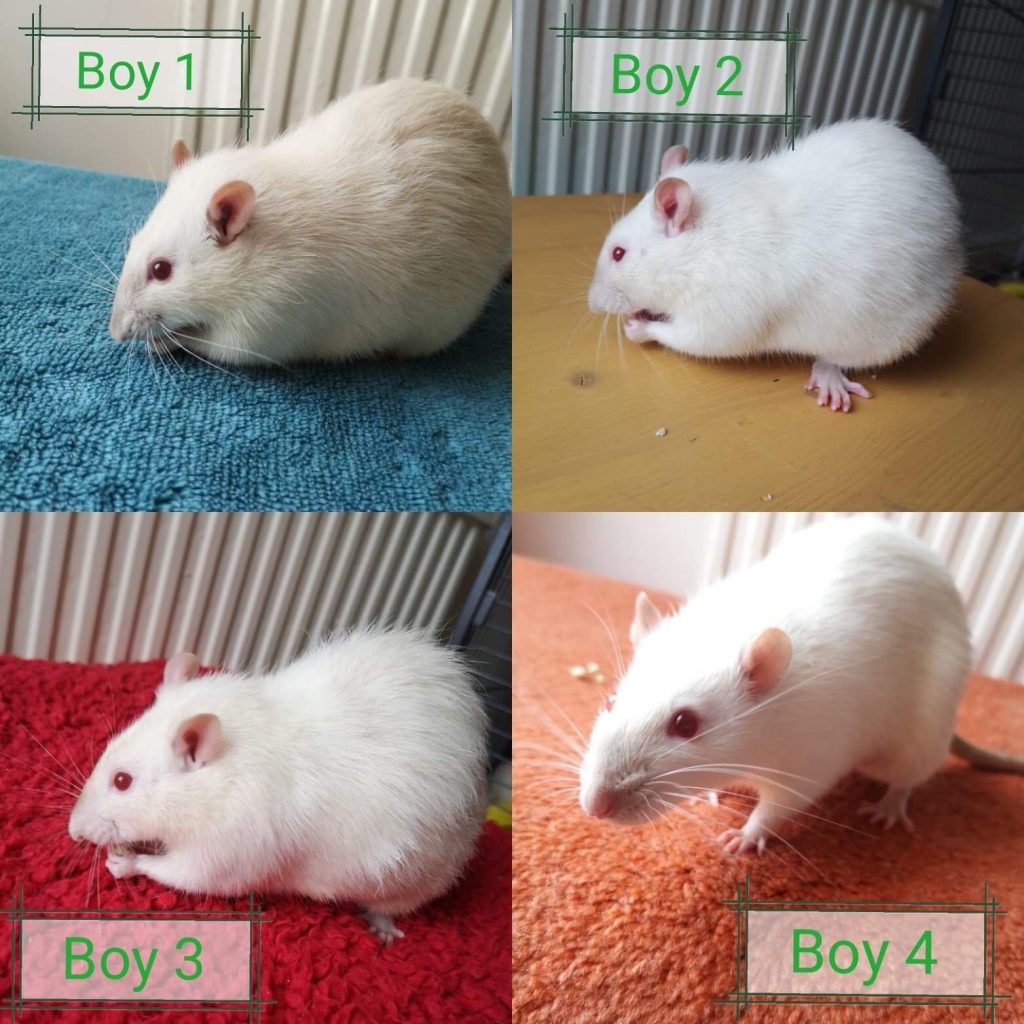 Take a look at these fellas! This is a first for us…. Rats! Well, certainly a first for me although I’m sure someone will let me know if we’ve previously been big in the ratty world! I’ll be honest, I don’t know much about rats and their needs (the fact that I queried whether the photos were actually of one rat duplicated four times probably confirms that!) but luckily for us their fabulous foster mum is a dab hand at taking some great photos of them, and providing personal biographies for them all.

They are thought to be just over a year old and didn’t have the best start to their lives. They were surrendered by their original owners and were in a bit of a state. Unfortunately the first kind lady to take them in had a dog who was rather too interested in them, so they had to move on to their third home. We are now looking for their fourth and forever perfect home – these boys have had enough moving round to last them a little furry lifetime.

They are currently unnamed so we just going with numbers:

Boy 1 Can normally be found chilling in his hammock. He’s the largest of the group and is really friendly with exploring being on the top of his agenda.

Boy 2 Has a small skin tag at the end of his nose and by chance he is the nosiest of the bunch, he just can’t wait to go and get his nose stuck into things, sometimes where he shouldn’t!

Boy 3 This boy is the bravest and is always the first to say hello. Even if all the others are sleeping, he will often still make the effort to come and say hi especially if there’s a yummy treat involved!

Boy 4 He is the most reserved of the group but is not by any means shy – he just likes to come over and investigate on his terms. Apparently he can be a bit of a drama lama if you pick him up!

Foster Mum is pleased to report she has never been nipped and all of them seem very healthy. Their coats were quite stained when they first came in so it will take time to get into perfect condition but this is already being helped by proper diet and will continue as they moult.

If you think you are able to give these four little characters the forever home they deserve, please fill in the adoption link below (ignoring the fact it says rabbits!): ADOPTION FORM

Mango was one of three brothers who came into the Rescue.  Unfortunately they acted like typical teenagers and decided they didn’t like […]

Take a look at this bonded pair of beauties! Bambi, who is a male, brown and white English spot, aged about 9 […]