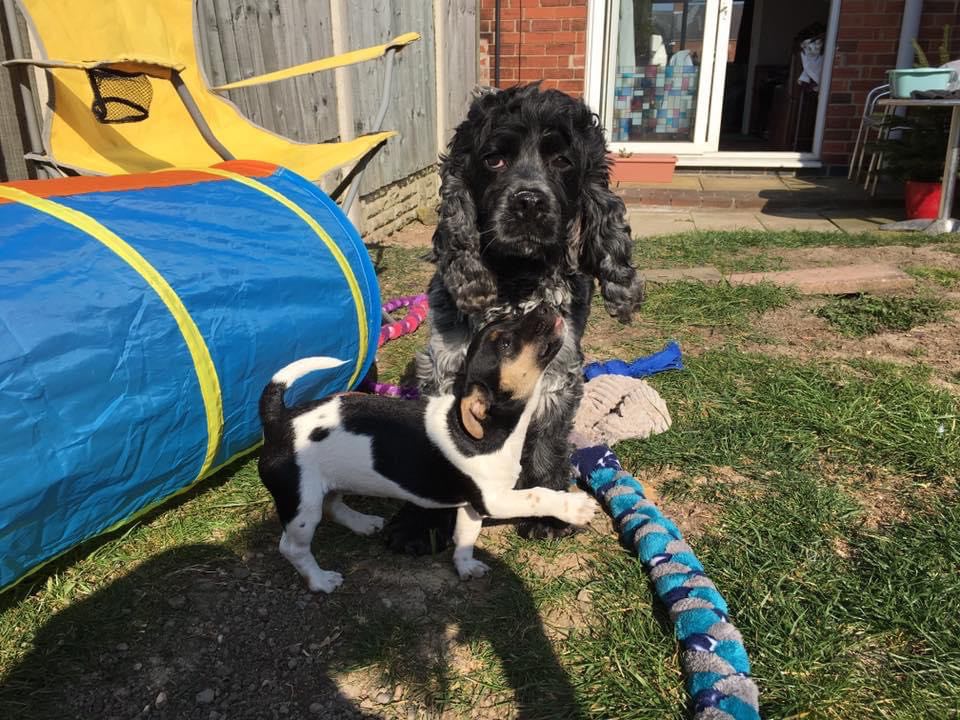 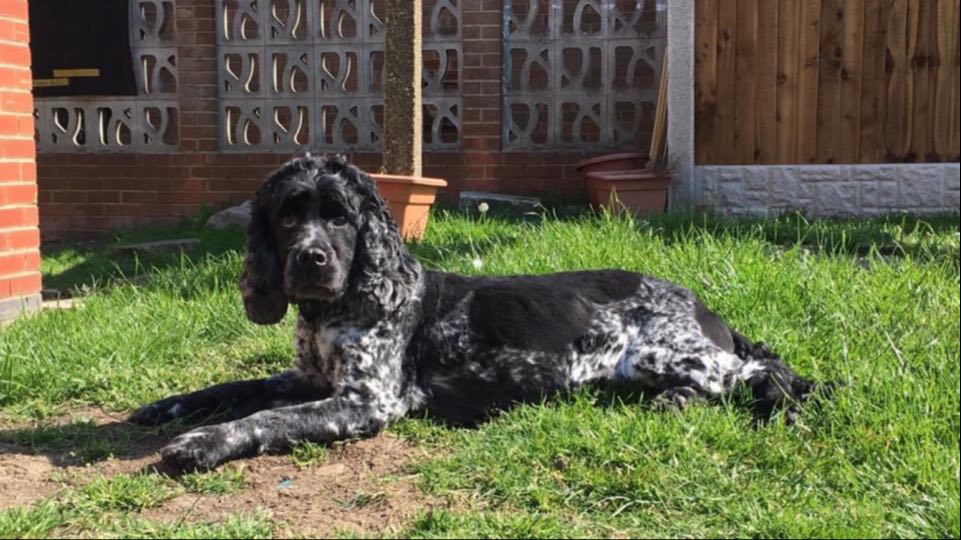 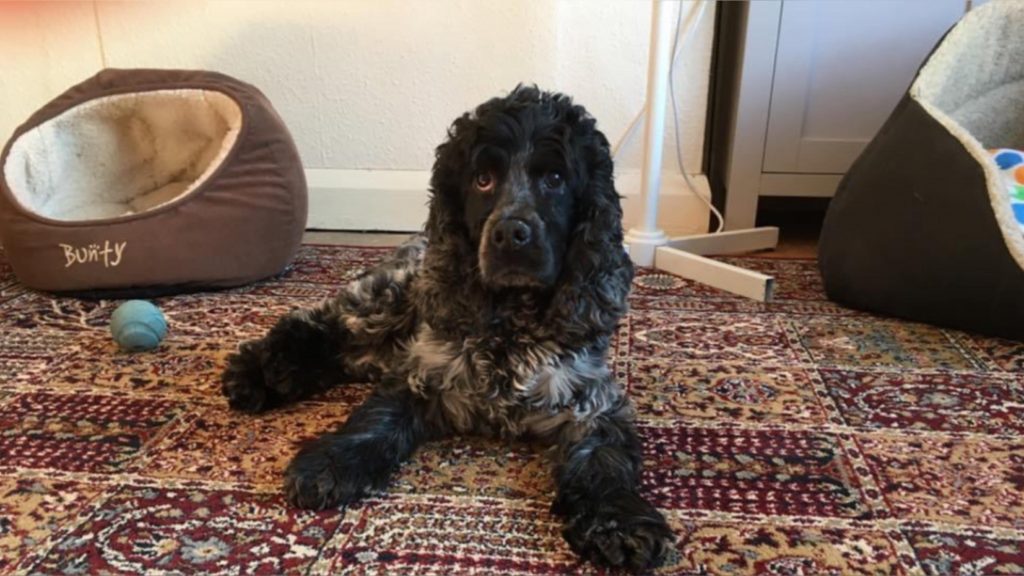 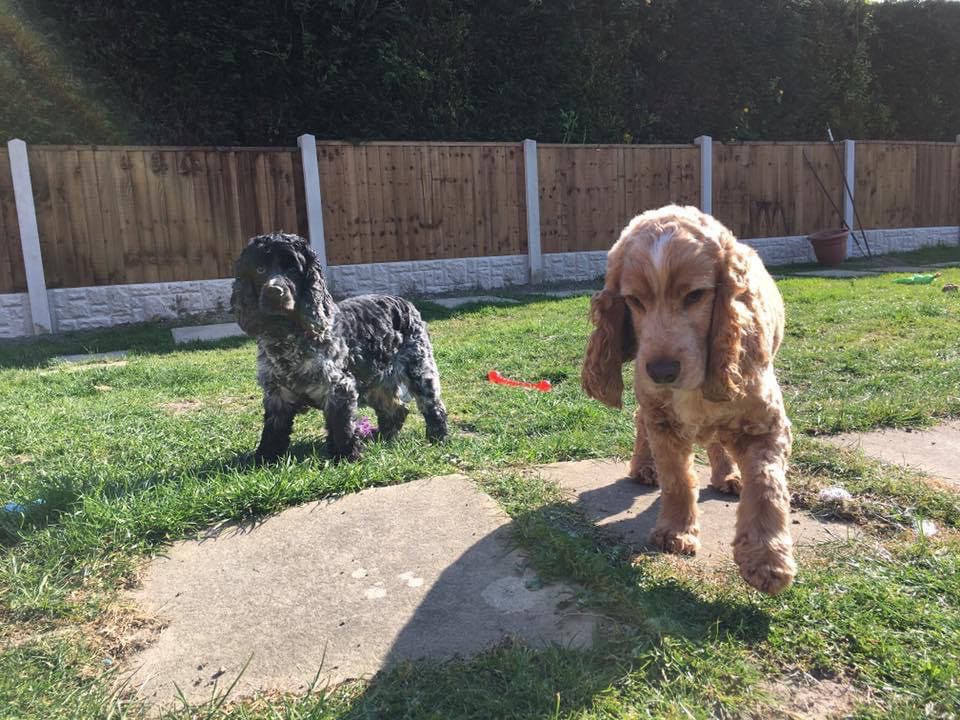 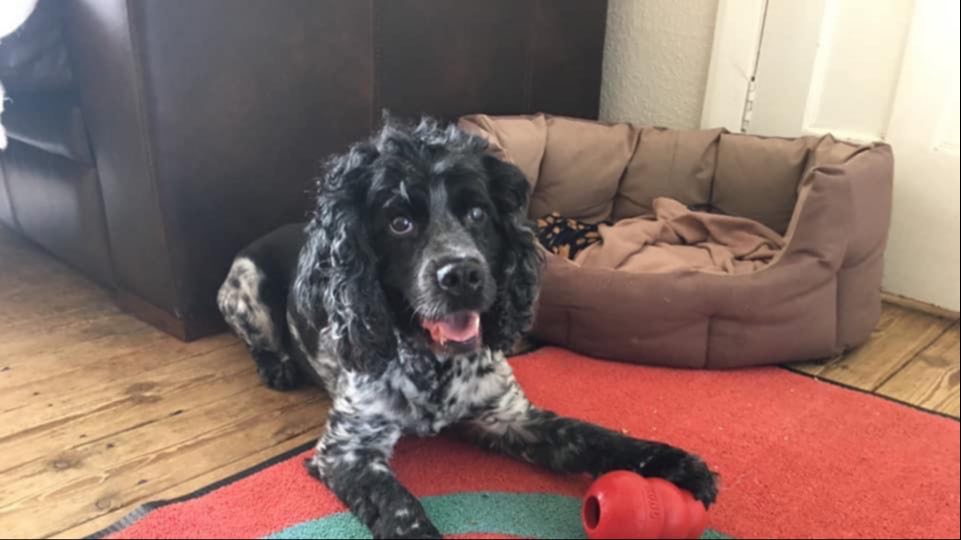 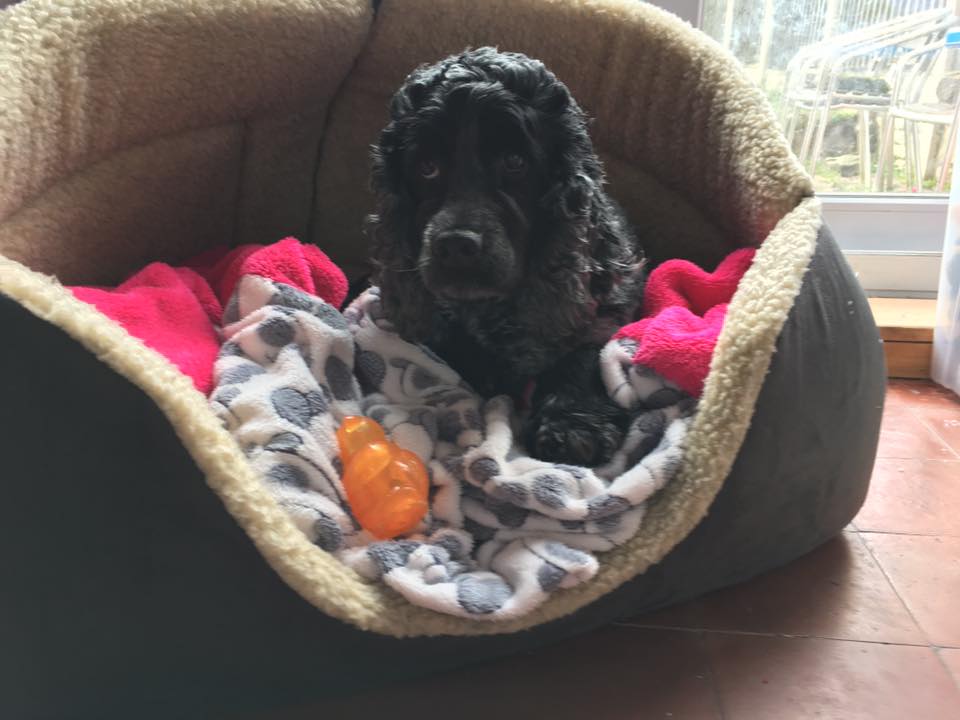 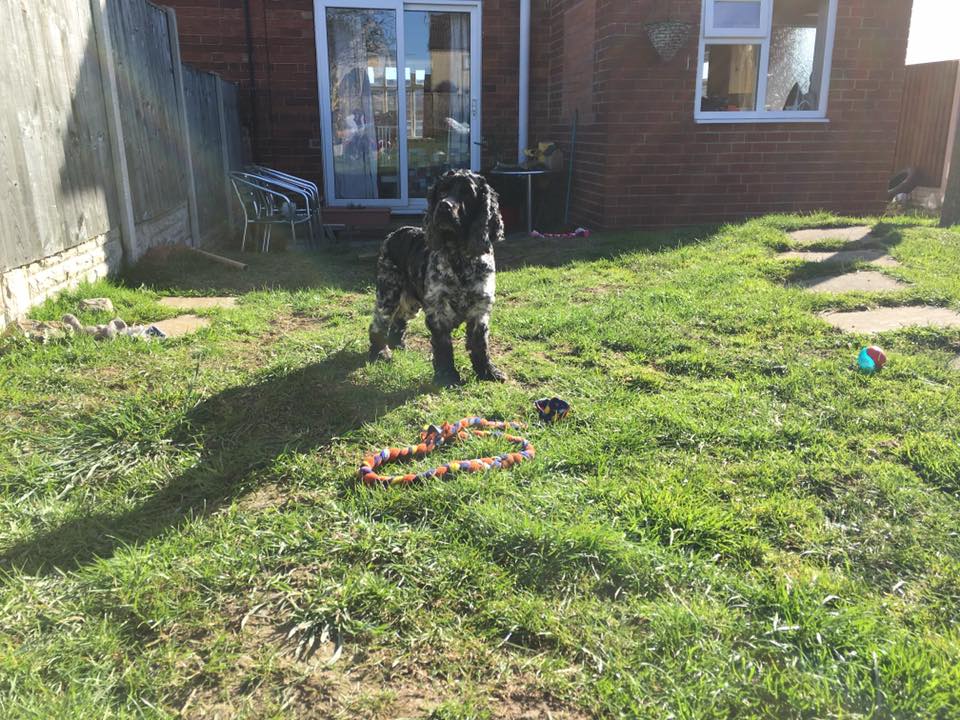 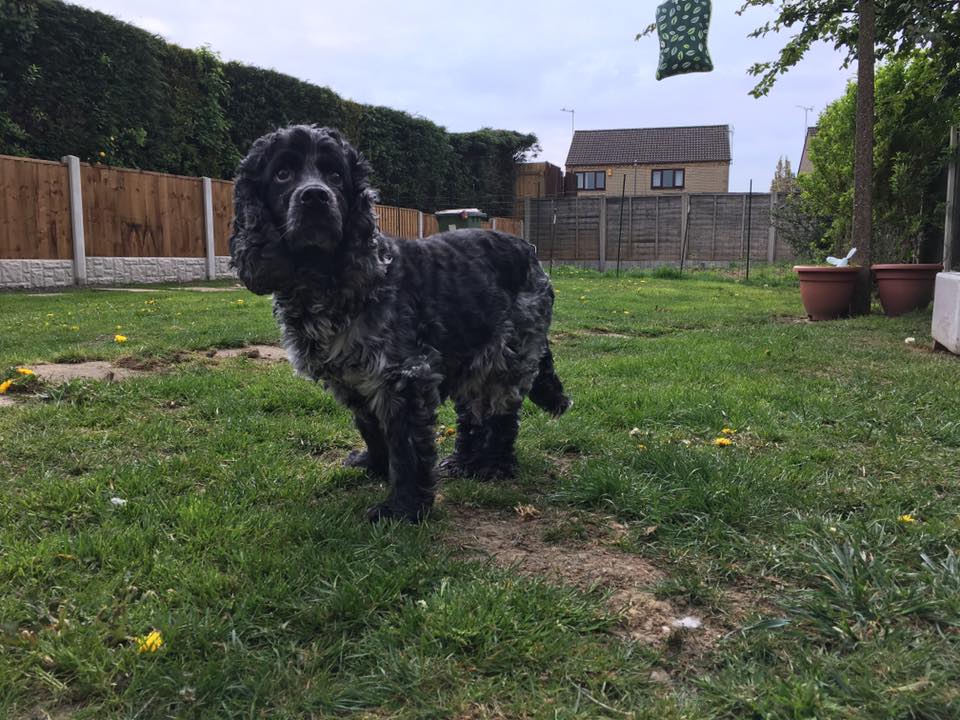 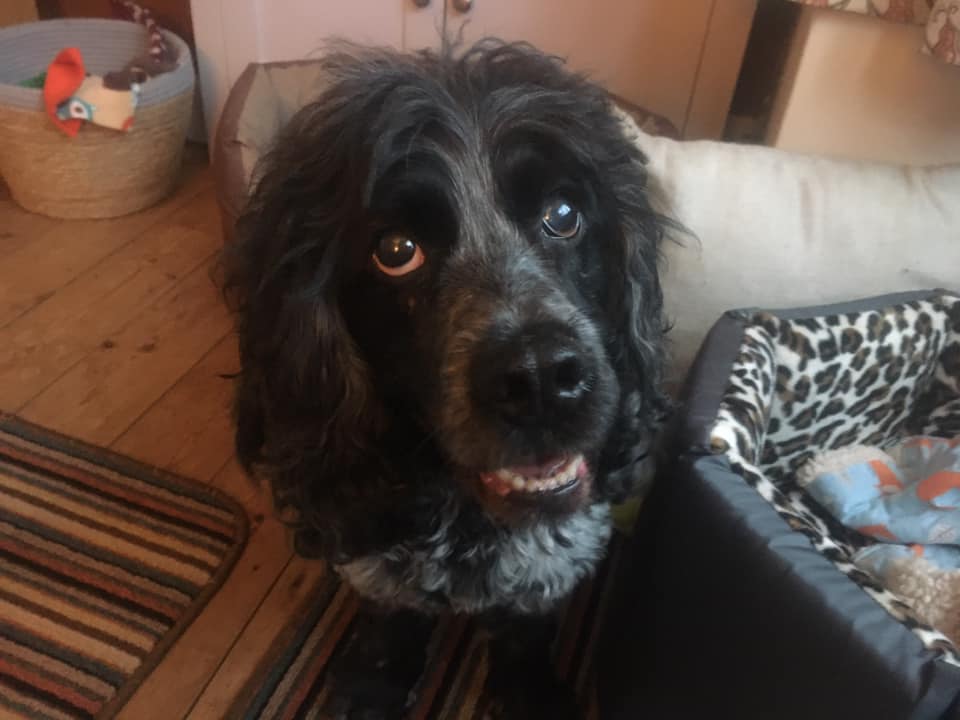 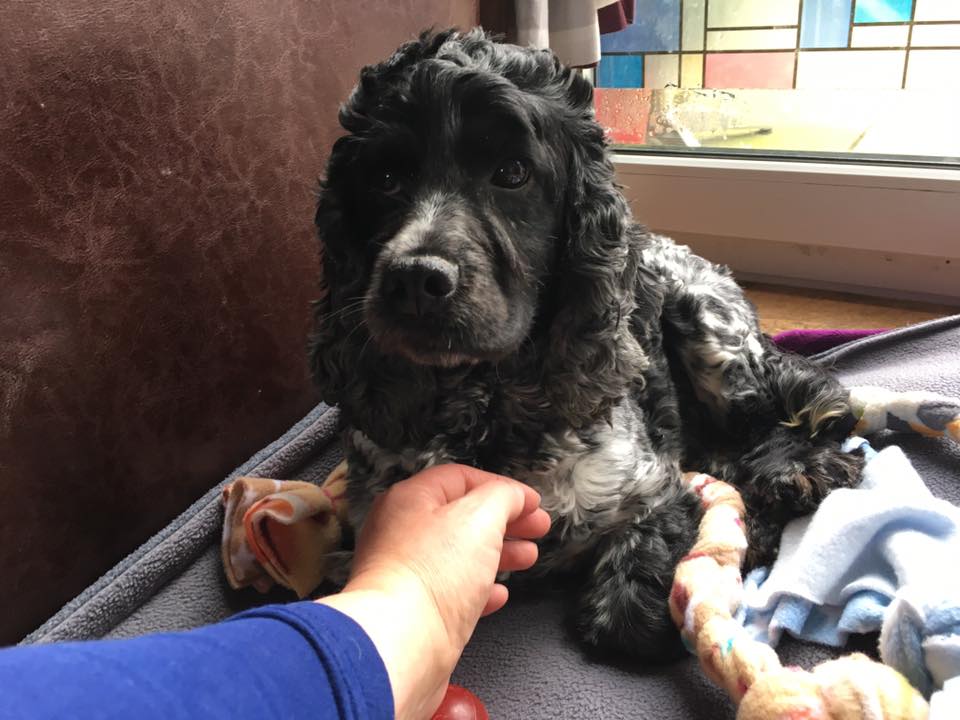 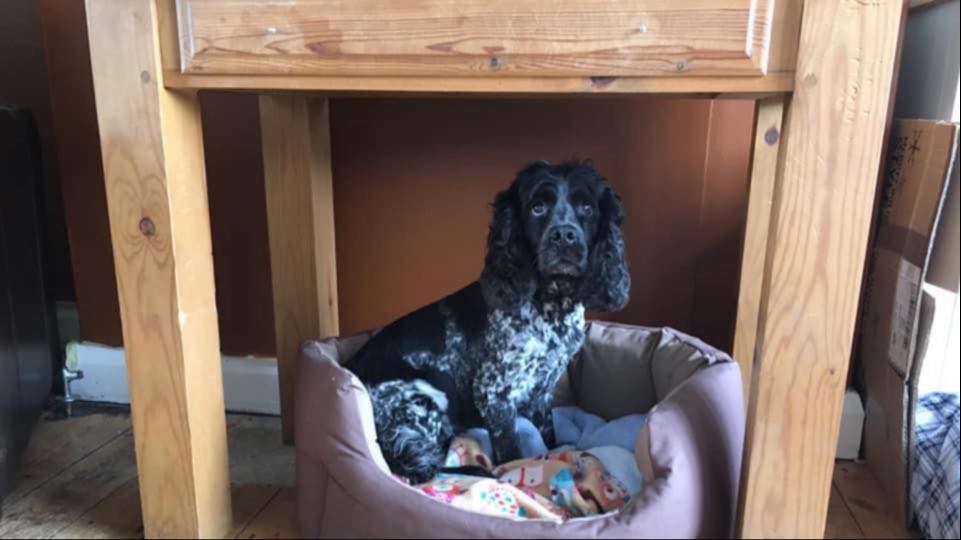 Grace is an Ex – Breeding dog who is one of the extreme cases we had had to deal with in your rescue, Grace is also blind and faces challenges some of us can only imagine.

Grace is looking for a very special home, maybe we are asking the impossible but every dog deserves a happy ending, don’t they?

Grace’s adoption will also be special, all current health will be supported and paid for by us as a rescue.

GRACE WILL NEED TO BE REHOMED WITH AT LEAST ONE RESIDENT DOG.

Health Issues: Gracie completely blind with CPRA. She requires eye check-ups every 4 months. Gracie may have slight urine incontinence but its been difficult to confirm. She does have very strong urine and checks herself quite often. Gracie is also on Riaflex as she has had a bit of a sore back and is on YuCalm to help her get used to being around people. Gracie has ongoing issues with her ears, primarily the left one. She has needed ongoing vet treatment to keep the inflammation down and pain free. The right-hand side of her face and head are very sensitive, this could be down to an eye or ear issue.

Gracie is a typical cocker spaniel in that she is inquisitive, lively, intelligent, feisty, and full of energy. She is a bit of a Velcro dog, in that she is constantly underfoot, wanting to know where you are going, what you are doing and does it involve food for her! Gracie can be very cheeky; she does bark and will sing loudly when she thinks she is due a meal.

People: Gracie enjoys visitors coming to the house, both strangers and people she has met before, because visitors means treats! Gracie will go to the back gate to greet people and will mug them instantly for treats. She is happy to approach people, sniff them and take treats but will not tolerate any attempts to touch her. Gracie is still very scared of physical touch and will do anything to avoid it. Gracie is very nervous when people are walking towards in her a small room (say the kitchen) and will panic and bolt pass, care must be taken that she doesn’t run into something hard when she is worried. Gracie has excellent communication and will growl when she is being pushed too far out of her comfort zone.


Can live with children: Gracie should not be rehomed where there are children or a particularly busy household. Gracie needs an adopter who can recognise that Gracie does often need a small push to help her progress but not to push her to far too soon.

Can live with cats: Gracie hasn’t met any whilst in foster, but we think she would be fine.

Can live with dogs: Gracie is currently in foster with 3 other dogs and must be rehomed with at least one other dog. Gracie would benefit from being rehomed with a patient older male dog, one who is polite and won’t be in her face. As Gracie is blind, she will bump into other dogs and potentially step on them. Gracie does try her best to check where the other dogs are before stepping but she does bump into them easily. When being handled, Gracie doesn’t tolerate any dogs near her when being handled and will again air snap if a dog comes into her space.

In the home: Gracie is not housetrained. If she is put in the garden, the moment she wakes up in the morning, 9 times out 10 she will go outside. However, during the rest of the day she will go on a washable absorbent mat in the kitchen. Gracie sleeps in large, open topped puppy pen in the bedroom. Gracie will howl if left alone and if she wakes up in the night, she likes to be reassured that she isn’t alone. Gracie should not be placed in a crate, Gracie can be destructive, and howl, when left completely alone in the house. She is happiest left with the other dogs and on occasion she has been left for 4 hours. She is left daily for about an hour with no problems.
Gracie eats VERY WELL! Eating is her most favourite thing in the world.

Out and about: Gracie does come to physio sessions with all of the dogs, which she seems to enjoy. She has learnt the map of the room, and happily explores the room and takes treats from the physio. When it’s time to leave, she knows that her foster mum will be picking her up to take her to the car and she waits patiently for that. Gracie currently travels in a dog car seat; at the vets we wait in the car until the vet is ready for her and carry her in. She is fine to be examined but struggle with ear exams.

Type of home: Gracie is looking for a home where the adopters are spaniel experienced, she has typical spaniel characteristics, where she wants to be as close to her humans as much as possible, but without them actually touching her.
Gracie has lots of energy and with not currently being walked, she needs quite a bit of enrichment in the form of food toys (Kong’s, etc) and a large garden that she can explore in. Gracie does run very, very fast for a blind dog and often runs into obstacles and doorframes, so a house where the furniture isn’t moved a lot and humans who walk carefully so not to spook her. Someone who is happy to let Gracie flourish at her own pace, that will love her and all her little quirks. That will give her space and time, that won’t flood her or handle her badly. Gracie is almost bursting with love, it’s there on the surface. She has so much potential and just needs the right family to show her how amazing life can be for her.

Grace is fully vaccinated and neutered and up to date with flea and worming treatment. Her adoption will be an assisted one where we will cover all future costs for her current health conditions.

Margaret is a 6-year old Schnauzer s, who is being fostered in South Wales. She is an ex-breeding girl who is just […]